I’m no stranger to driving. I cover around 1000 miles in my car on an average week and it’s not always in ideal conditions. In fact, over the years I’ve come to think of myself as pretty skilled behind the wheel – maybe that was the problem.

Last Friday night I found myself working in Poole, Dorset. For those that don’t know the geography of UK that’s a town on the South coast (the bit that looks out toward France). That’s about as far as you can get from my home in Cumbria without getting wet. I live in the North West of England, about 30 miles South of the Scottish border in a town on the edge of the English Lake District called Workington.

Normally it would take me around 7 hours to drive home from Poole. not such a big deal, even accounting for rush hour traffic. So I left work at a little after 4pm to travel back to Cumbria. I knew that there were bad weather warnings but I’d dealt with that stuff before. I’m a Cumbrian – we’re used to bad weather. Bring it on!

The snow hit when I was at about Warwick and it did slow the traffic down a bit. By the time I left the motorway (Jct 36 of the M6) it was midnight. That was a bit behind schedule but hey ho – no problem.

I had planned to follow the M6 motorway to Jct 40 and take the main road from Penrith. It’s a bit further to drive but it’s a better road. However the M6 was blocked at Shap summit according to the ‘matrix signs’ so I came off at Kendal instead. The plan was to stop at the Kendal travelodge because my good lady, Gill had already called to warn me about impassable lake district roads and I didn’t want to push my luck.

Alas – the road to the Travelodge was closed but there was a diversion into Kendal so I kept going. I could always double back to the travelodge from Kendal town centre. However the diversion took me to a dual carriageway with no way to double back. Oh bugger!

By now there was so much snow on the road that I couldn’t stop the car – I’d never have got it moving again. I was committed. I couldn’t stop and I couldn’t turn around. I just had to drive on. To stop would have meant a night in a freezing car with drifting snow and no telling how long I’d be there. Not a sensible option.

Of course a wise man would’ve stopped in Kendal but I’m no wise man.

So with 55 miles still to travel I soldiered on through the A591 – The ‘Lakes Road’. The Lakes Road is normally a beautiful, scenic route that takes in lakes, meres, quaint little towns and villages and, of course, stunning mountain passes. Stunning so long as you can see the bloody road!

With nobody but myself (and my own stupidity) to blame I soldiered on. I drove through Ings and Ambleside without incident. Admittedly I averaged around 15 miles per hour (and slowed down for the corners) but I got through. I even passed a deer on the road. I was going so bloody slowly it didn’t even run – it just stood there and watched me drive past. I passed the mini roundabout at Grasmere easily enough (yes even a mini roundabout feels like an obstacle in those conditions) and then I began to climb. I was driving up Dunmail Raise – the largest and steepest mountain pass on the Lakes road. And I still couldn’t see the road for the thick carpet of fresh snow that obscured my path.

Of course a wise man would’ve stopped in Grasmere but I’m no wise man.

Going up Dunmail wasn’t so bad. It was going back down toward Thirlmere that was the problem. The picture below shows you the view from Dunmail top to Thirlmere (the lake in the distance) but it doesn’t give you any hint of what it was like in the early hours of Saturday morning as I drove down the steep, narrow, winding road into the valley below. 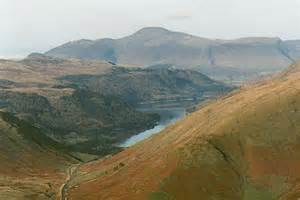 Then came the long road past Thirlmere – a terrifying combination of sliding tyres, sharp corners and dry stone walls. Not fun at all but nothing to the delights of Thirlspot hill to come. Another short climb out of the Thirlmere valley and the car literally slid down the next hill to Thirlspot. I had already decided to pull into the car park of the Kings Head Hotel at Thirlspot and wait until morning but there was so much snow I couldn’t see the bloody entrance. So on I went.

Next came Castlerigg – a beast of a climb that took every ounce of my driving ability. If I’d lost traction only once I’d have slid right back to the right angle bend at the bottom of the hill and a really memorable ‘prang’. Not a good plan.

But I made it to the top and started the descent into Keswick. Guess what I’d forgotten…. the right angle bend half way down the snow covered hill with the sheer drop to the lake below. Oh bugger!

‘Gingerly’ doesn’t describe the tentative way that I applied the brake until by the time I reached the corner I was doing a full 5 miles per hour and still sliding. Now that really was scary! As a young man I’d worked behind a hotel bar not far from that particular corner and I still remember the story of a tourist who took the bend too fast and effectively ‘flew’ into the fields below – hundreds of feet below. He died, of course – torn and twisted (as Meat Loaf would’ve put it) at the end of his undoubtedly spectacular ‘flight’. That memory was vivid in my mind as I wrestled the car around the tight corner and continued down the hill toward Keswick. Only another 25 miles to go.

I won’t bore you with the rest of the drive but it wasn’t pleasant (although the solway plain does have a somewhat more temperate climate once you leave Keswick). Suffice to say that I was glad to get home after 55 miles (and two and a half hours) of the scariest drive of my life.

The next day was Saturday and I slept until early afternoon before spending the day more than a little preoccupied. I had to do it all again on Sunday. Fortunately though about half an hour before I was due to leave for another 200 mile trip my boss Emailed – the meeting had been cancelled. To say that was a relief really doesn’t describe the sense of reprieve I felt. but that left me with another problem. I didn’t want to get back in the car at all. That’s how phobias start but there it was – I was really scared.

Then Monday came – today – and another 170 miles to South Yorkshire. I checked the weather (and the traffic reports) and all seemed OK so reluctantly I set off. And here I am in Rotherham – 4 hours from home and happy to have driven over the Pennines to get here. I’m not scared any more but by ‘eck – perhaps I should be.