Depressed people tend to think in a particular way. They tell themselves the same sort of gloomy, pessimistic things over and over again. This is what psychologists call negative thinking. After a while this pattern of thinking becomes a habit. When that happens it is described as automatic negative thinking. This habit formation is one of the most damaging aspects of depression as it locks the sufferer into a downward spiral which drags them deeper and deeper into despair. 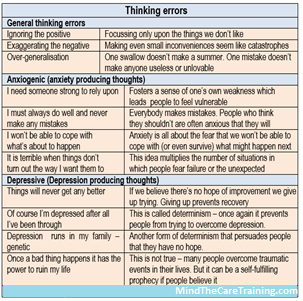 People seem much more likely to focus upon bad things that happen to them than they are upon the good.

Having focussed upon bad stuff many people then seem to blow it out of all proportion until it overwhelms them.

One swallow doesn’t make a summer. One difficult conversation doesn’t mean it’s going to be one of those days and a couple of frustrations this week don’t mean you’ll never succeed at anything.

Let’s look at some more precise forms of depressed thinking.

Things will never get any better

If we believe this then we also believe that there’s no point in trying to improve things. This one thought stops depressed people from joining in with their treatment plans. These people become lethargic and apathetic. Not the most helpful start to recovery.

People would be better off without me

It’s not difficult to see where this thought pattern is leading. Many depressed people are so convinced of their own worthlessness that they come to see themselves as nothing more than a burden to others. This idea can lead to withdrawal, social isolation, shame and even self-harm or suicide. Once again this is not a helpful way to think about oneself.

This is a remarkably common depressive thought. It also seems quite reasonable at first glance. People who’ve been through difficult times are almost expected to become depressed. The problem is that such a belief system takes away the individual’s choices. If you believe depression is inevitable you won’t really struggle against it and so you won’t change it until you believe you’ve suffered enough. It’s often interesting to ask people how much suffering will be enough.

Some people ‘wear’ their depression like a badge. It’s as though they think they’ve earned it and no one’s going to take it away from them. Of course it’s true that they have a perfect right to feel as depressed as they like for as long as they like. The question is – why would they want to?

This attitude is called determinism. That’s the idea that people are helpless victims of fate. They believe that because their parents suffered from depression they also must. Of course it’s true that depressive illness does often run in families but that’s not always because of genetics. Sometimes it’s simply because of the coping skills we learn from our parents. Skills which can be unlearned or altered – often with surprisingly little effort. Even those people whose depression does appear to be genetic can be helped considerably once they let go of their deterministic attitudes. Any thought that implies helplessness is deterministic and extremely damaging.

What can depressed people do to help themselves?

Become an ‘inverse paranoid’. Expect good things to happen every day. This doesn’t necessarily mean the world will treat anyone better – but it does mean that people notice good things when they do happen and won’t waste time ruminating about or getting paranoid over the little inconveniences that happen to us all.

The simple truth is that if depressed people wait around for someone else to make things better for them it just won’t happen. However since one of the symptoms of depression is lack of motivation the big danger is that they will do just that. Your job as support worker is to motivate service users to take responsibility for their mood and circumstances while still giving assistance as needed.

This can be a difficult balance to strike. The general rule of thumb is to intervene less and less over time as the service user is encouraged to do more and more for themselves. But be careful. This isn’t an excuse to abandon people who really need our help – simply an awareness that they need to work toward greater independence as time goes on.