However we look at it mental health care has had a chequered past. From early demonization of anyone who was ‘different’ to the passive acceptance of ‘lunatics’ and ‘village idiots’ and even the high status of ‘Shamans’ and ‘seers’, society’s responses have been varied to say the least. Even today the social standing of those who hear voices differs greatly depending upon just whose voice the person claims to hear.

The voice-hearer who reports communing with aliens from Venus will be treated very differently from the medium who claims to interact with the dead. Yet their experiences may not be all that different – except, of course in the way that society responds to them.

The last few hundred years have seen massive changes throughout Europe and the rest of the Western world. The ‘asylum era’ operated a policy of ‘congregate and segregate’ in which people who didn’t quite ‘fit’ were segregated by sex and congregated in large, purpose built buildings away from the rest of society. The basic idea was ‘once a lunatic, always a lunatic’ and many people who would be fully integrated into modern society were written off as ‘hopeless’. But then it was only the middle of the nineteenth century. 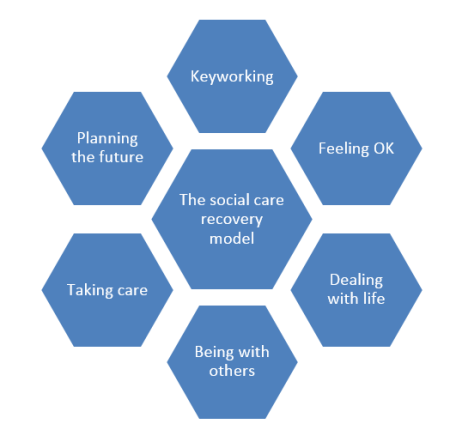 The end of the asylum era really came about after world war one. Injured and shell-shocked troops needed hospital beds and the asylums were all but emptied to make room for them. The move back to the community had begun. The evidence of traumatised soldiers recovering (in part or on full) and returning either to active service or to civilian life changed the popular hopelessness about mental health to one of cautious optimism. Society began to rediscover the possibility of recovery. It was a beginning. It wasn’t the end of the journey – but then it was only 1918.

Not that everyone had entirely forgotten about recovery. Beginning in the late eighteenth century William Tuke, a Quaker philanthropist founded The York Retreat where he advocated Moral treatment with apparently remarkable results. Moral treatment was based upon the idea that dignity, social value and community involvement were the most important parts of rehabilitation. So everyone was given good food, clean quarters, fellowship and a clearly defined job, either on the retreat’s farm, helping to maintain the accommodation or some other worthwhile occupation. Tuke and others like him were rediscovering the value of social role in recovery.

By the mid twentieth century however our understanding of mental health had taken a very different tack. Social inclusion was still present but it had largely taken a back seat behind the biomedical model of mental health – the idea of the chemical cure or ‘a pill for every ill’. Unfortunately, in the case of the most severe mental disorders such as schizophrenia and bipolar disorder this much sought after chemical cure remained out of reach for most people. Medication could certainly relieve distress and other symptoms but recovery statistics in UK are not much better today than they were in 1952 when the first antipsychotic was developed and they weren’t brilliant then. But it was only 1952.

Today we take a more inclusive approach. It’s clear that neither social concerns nor medical interventions are enough by themselves. True recovery involves a combination of different strategies, some medical, some social, some environmental and some psychological. That’s why we talk about ‘stress’ and ‘vulnerability’. Different people have different vulnerabilities and need different approaches to overcome their problems. For some that means medication. For others it means social value and meaningful occupation. For most it means both.

The World Health Organisation’s International Study of Schizophrenia made it clear that those countries with the greatest degree of social inclusion also had the highest recovery rates. Social care and social acceptance matter just as much as medication and psychotherapy.

That’s where social care comes in. Support workers’ role is not to become too distracted by medical concerns about a pill for every ill. That’s what the psychiatrist does – and psychiatrists do their jobs extremely well as it is. The task of social care is to work alongside the psychiatrist to help fulfil the social care needs of the individual. Social care workers create a safe and positive environment with opportunities for meaningful activity and they help people to find a valued place in the world.

I believe that the next few decades will see even greater emphasis upon collaboration between medical and social care workers. I believe that social care workers will continue to grow beyond the image of the doctor’s assistant in the community. They will develop into a clearly defined specialty in our own right, separate from doctors, nurses, psychologists and even social workers. And as the specialty of social care develops, service users’ prospects of recovery from serious mental disorder will develop along with it.

We haven’t finished the journey toward the perfect service yet but we’re working on it. After all – it’s only 2017.

Complete the contact form below to arrange training for your staff.