If anxiety is a call to action that is there to help us solve a problem (how to be safe) depression is the opposite. Depression is a form of physiological de-arousal. This is about giving up. Very broadly speaking depressed people are no longer interested in finding a solution. They have decided that there is nothing to be done and so they give up. Of course there are degrees of this ‘giving up’ and it’s not really as ‘cut and dry’ as all that but none the less depression does have an element of giving up about it. That’s not to suggest that it’s a voluntary ‘submission’ to depression but it is fair to say that depressed people are generally less determined to sort out their problems than anxious people are.

This may seem strange but it actually links very well to the stress and vulnerability model we mentioned in an earlier episode. As people’s stress levels increase they become anxious and try to solve their problems. However if they are unable to solve their problems and the stress increases they give up trying to sort things out and so their anxiety (a call to action) subsides. At this point they move up the scale of mental disorder into depression.

Biological (physical) signs of depression include sleep disturbance (too much or too little), appetite disturbance, apathy and lethargy, tearfulness, slowing down of physical movement and passivity (the opposite of assertiveness).

The service user who never seems to cause any problems or demand anything from the staff might not be content – they are just as likely to be depressed. Be aware of the risk of suicide. According to the Beck Suicide Scale (BSS) the best indicators of impending suicide apart from past behaviour are ‘helplessness’ and ‘hopelessness’. Both of these things are features of depression. 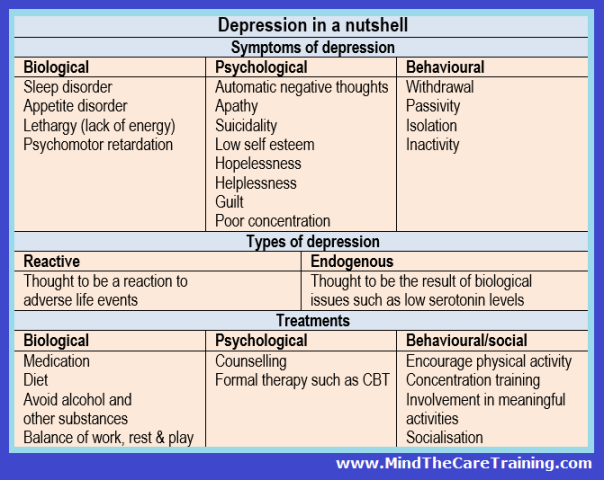 Clinical depression is different from sadness. We all have bad days and the occasional low mood is just part and parcel of normal mood variation. Clinical depression includes the biological symptoms mentioned earlier and is thought to result from a reduction in the levels of various brain chemicals such as serotonin. However, as we noted in a previous episode on physiology there is a ‘chicken and egg’ situation here. Low serotonin levels can cause depression but inactivity (a major symptom of depression) also reduces serotonin levels still further. It’s not always terribly important to worry whether the depression came first or the inactivity was the cause. As is often the case dealing with current problems may well be far more important than trying to understand the history of the disorder. Sometimes ‘here and now’ is all we need to work on – at least in the beginning.

For example ensure that people’s current behaviour doesn’t undermine recovery. Many people turn to alcohol when they’re down but that simply makes things worse. Alcohol depletes serotonin levels which not only deepens depression it also prevents anti-depressant medication from working properly.

However as the depression begins to lift that sort of historical information can be extremely useful – but only if we know how to use it and what to do with it. That’s where diagnosis falls down – it’s only really interested in current symptoms. Formulation is more comprehensive and takes account of the many factors that led people into depression as well as the aspects of their thoughts and behaviours that kept them there. If diagnosis helps us to know what the problem is, formulation helps us to ensure people overcome it and then have at least a fighting chance of avoiding relapse in the future.

All that fancy stuff aside (we’ll get to it later) the basic trick with depression is positive action. Get people active again and give them a reason to continue to take an interest. This is more than mere distraction – it involves purpose. Clearly purpose can be difficult to achieve with some people but it’s worth working at none the less. Purpose and security also make it much less likely that people will present with challenging behaviours too. They have no reason to so long as their needs are being met.

There is, of course, much more to depression than we’ve covered in this little introduction. In particular we need to consider the specific thoughts and behaviours that both create and maintain the disorder. We’ll get to those as the series progresses. For now it’s enough to describe in broad terms what depression is. How it is assessed and what we do about it will come later.