This series of blog posts first appeared a few years ago on a now defunct blog called ‘Care Training’. It was inspired by the training maxim of ‘making the unconscious conscious’. It is intended to take what really ought to be the most basic principles of health and social care and put them down on paper. The series isn’t only an exercise in stating the obvious though whatever the title might suggest. It’s actually intended as a philosophical foundation manual for workers and informal carers to help them get their care ‘on track’ and then to keep it that way. 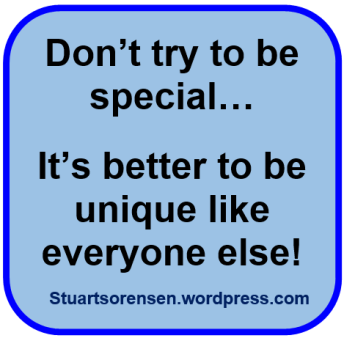 Following on from the ‘no such thing as ‘us and them’ post I’d like to make a more general point about people. Nobody is special. There – I’ve said it. You are not indispensible at work and your boss, your colleagues, your friends and your favourite service user are all replaceable. Nobody is special because people are just people.

If you work in mental health or social care services you will be used to certain professionals behaving as though they are more important or somehow more worthy of respect than others. You may even be tempted to behave that way yourself. Many in my own profession of nursing seem as though they have been pre-programmed to emphasise their own importance way beyond all recognition.

Different professional groups have different responsibilities and different levels of education are important but they don’t make us special. I’m a nurse – a pretty well educated and experienced nurse at that but that doesn’t put me in a position to tell a newly qualified social worker with a basic professional education how to do their job. I’m not special and I don’t know everything.

Similairly whilst I’ll happily defer to a GP when dealing with complex physical problems I’m not about to take their word when planning a cognitive therapy strategy for someone with psychosis. I will listen to them though.

By the same token I may be responsible for planning and organising a shift and delegating care tasks to support workers but I’d better not forget that they are more likely to know the best way to hoist, bathe or feed a particular resident than I do because they know their own jobs.