Lots of people seem to be very confused about the nature of evidence and the meanings of terms such as ‘theory’, ‘hypothesis’, ‘science’ and ‘nonsense’. So I’ve put together a little table that I hope will be helpful. It might clear up a few misunderstandings.

For example the phrase ‘only a theory’ doesn’t mean it’s not reliable. In fact, in the case of very strong theories such as the theories of evolution or gravity it’s as close to fact as cautious, scientific convention will allow. Creationists beware – you have no idea how silly you appear when you use that particular phrase to try to knock down Darwinian evolution.

I’ve made some amendments to the table below. This is because some people have challenged the ranking of the examples I used in the original. Since the point of this post is to outline the hierarchy itself I’m quite happy to use different illustrations. I may yet make further amendments in the light of scientific evidence for reincarnation which I have been promised and am hoping will actually materialise. Incidentally that’s the main advantage of scientific thinking methods over ‘Just so’ stories like creationism. Scientific thinking involves accepting when the evidence demonstrates that we have been wrong and changing our minds accordingly. That’s why scientific understanding moves on whereas creationism (for example) is essentially making the same, tired arguments that the Rev. William Paley first came up with 200 years ago.

Anyway – I hope this table helps clear up some issues for the hard-of-understanding among us.

If your browser only displays half the table just double click it to see the whole thing. 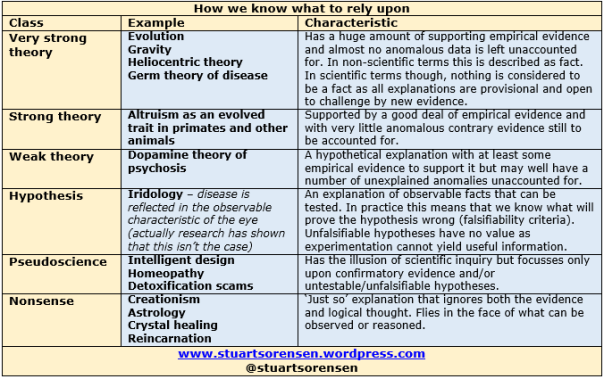 9 thoughts on “How we know what to rely upon”